Big data: Linde engineers used data analytics capabilities to develop an algorithm allowing them to look into the inner workings of air separation units – long before they need to be dismantled for maintenance.

It is a mighty torrent – every hour of every day. In any given minute, Linde records 650,000 data points. At seven remote operating centres, the data streaming from hundreds of production facilities gives insights into pressure, flow, temperature, vibrations, product quality, energy consumption and more. Since 2007, the company has gathered 20 terabytes of data from plants it operates around the globe. These bits and bytes document the history and health of each plant over its entire service life, also flagging weaknesses and outages.

And the surge of data shows no signs of easing, with five new gigabytes arriving every day. This might sound overwhelming to some, but for rotating equipment expert Ingo Forstner, it is a gold mine. Together with his colleagues, Forstner is responsible for determining the condition of the compressors that pump air into the separation process. Every four to six years, these giant air separation units need to be partially dismantled to maintain them and replace worn components.

Escalating costs due to unplanned downtime

Depending on the equipment in question, this can take up to four weeks. During that time, the gas supply is interrupted, so steelworks, for instance, don’t have the oxygen and argon they need for their furnaces or food manufacturers don’t have the nitrogen they need to freeze their products. Scheduled downtime can result in revenue losses many times higher than the maintenance costs.

Worse still are unplanned outages, when a facility suddenly has to be shut down to protect people and machinery. Given the high stakes, the on-site maintenance team is often expected to get the job done in even less than four weeks.

500,000 sensors – incorporated into compressors like these – collect information that the algorithm evaluates. These insights form the basis for predictive maintenance.

Efficiency is essential, especially as it can take several months for an ordered part to be delivered and then installed. So, the better the team’s insights into the inner health of a plant, the more efficiently they can plan and work. Linde’s maintenance experts decided to team up with both the Digital Base Camp – Linde’s internal accelerator for digital projects – and an external service provider to develop an algorithm that could raise an alarm whenever an item of equipment shows signs of sub-optimum performance. For the algorithm, the experts analysed the data stream from 30 machines across seven facilities over an entire year.

“The question was: Does the data align with the physical interdependencies we would expect to see?” outlines Forstner. The engineers know that a bearing temperature increase will result in a measurable upturn in vibrations, for instance, while a change in pressure has an impact on both vibrations and temperature. The algorithm first had to learn about these interdependencies over an extended period of time.

Up to speed in six months

This might at first sound simple but in fact entailed six months of detailed work, since almost no two plants are the same and the operating conditions vary from one location to another. A great deal depends on differences in climate and on customer requirements. Thanks to the massive data stream and large number of facilities in operation worldwide, the engineers can now see which parameters indicate an imminent system failure and which represent the optimum condition.

“We used mathematical models to analyse the historical data and predict what might be a healthy value for the relevant sensors on a future date,” describes Markus Frondorf, Founder and CEO of anacision – the data science company supporting Linde with this project. During the pilot phase, which ran until the end of 2017, the team of engineers and data analysts compared the desirable healthy value from their calculations with the corresponding measurement from the historical data set. “What we want is an early warning system to alert us to all impending failures. So, our model searches through the historical trove of data to predict possible outages.”

The predictive power of algorithms

More than a year after the project was kicked off, the algorithm is ready for operational deployment. Checks against the historical data reveal that it would have flagged up many failures weeks in advance if it had been running at the time. Forstner is confident: “We have developed predictive analytical capabilities with this algorithm.”

The remaining question is how effectively Linde will be able to use this new algorithm. Not that the company lacks experience in maintaining its own facilities, but the efficiency gains of decisions based on the algorithm will only emerge in 2018, when it transitions from the lab to a live environment in Asia.

Thomas Heinzerling, Head of Regional Operations, is confident that the algorithm will help to turn unplanned downtime into scheduled maintenance windows – and, above all, pave the way for more dynamic, demand-driven maintenance schedules. “Sometimes we look inside a compressor after six years and find nothing wrong.” In these cases, the software could indicate that maintenance should be pushed out. The opposite also holds true: maintenance could be pulled forward if the parameters signal a downward curve.

In the long term, Heinzerling anticipates that the predictions and analyses delivered by algorithms will become increasingly detailed – to the point where the installation team will know what to expect even before they look inside the system. Ultimately, Linde might also be able to pinpoint equipment offering scope for structural optimisation and these insights could be channelled into operational or even engineering enhancements.

This article was first published in the 2017 Linde Annual Report. Download a pdf of the full report here. 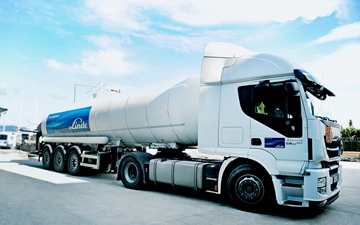 Artificial Intelligence is optimising a number of processes at Linde. When it comes to road transport, it even presents an opportunity to save lives. 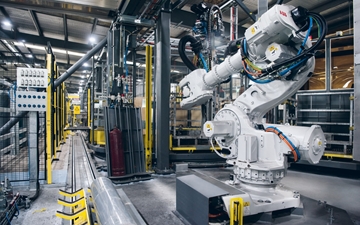 Leading the new era of automation

To reduce accidents and increase efficiency, Linde has robots do the heavy lifting in its filling plants.